I'm not sure this will come under the title of helpers exactly but it is what it is.  My husband, long officially retired (?) from toymaking and major art shows finally found some renewed art passion.  It's been awhile before there was something he could enjoy again.  Knifemaking and forging is something he can do and take breaks with.  The forge has to heat the steel up and so he gets breaks in between hammering.  Hammering isn't so good for him either so our oldest son found him an old Murray power hammer and it takes most of that out of the equation.  Whew!  Good, right? 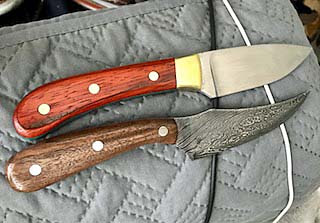 These are the types of knives he makes.  Some are regular and some are Damascus.  He is especially fond of making the Damascus and for that especially he needs that power hammer.  He loves doing this.  Nah, he's not selling them but it's gratifying.

It's gratifying but the power hammer is frustrating.  Not to him.  To me when I need to work.  Me and especially to my eldest "studio assistant".  Yes, everyone has assistants, right?  Damn right!

So I'm working on setting these pieces in hoping they will be juried into the shows later this summer.  I don't have time to make some glass that I would set.  It would be a bit before I could perfect what I'd like to present.  It's not that I couldn't maybe get the glass ready.  If I worked diligently at it I might.  But I'd never get the glass and set it in time to participate.  I've decided to instead work with something that fits the theme's "reflections" and something that has tripped my trigger for a lifetime!

When I was a kid my grandfather used to attached glass reflectors to my bike.  He told me they were gems.  I kept those reflectors - I love them.  To me glass, in any of it's forms, is exactly like gems.  I don't much tend to make any distinction there.  My "perceived" value is the same.  Over the years I've collected a wide variety of reflectors but more recently came across an entire stash of them.  So that will be my focus for these pieces of reflection.  My history, my perception, the reflections.

What's holding me up?  Studio Assistant.  This is how the power hammer affects my one of two beloved furbabies. 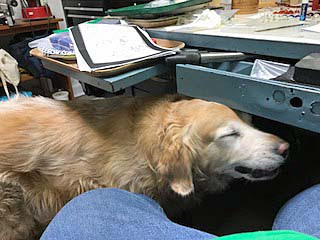 I am a quirky, happy, creative, solution oriented, procrastinator. And, I don't just love art - I'm immersed in it. Metal, Glass, Ceramics, Fiber, Paint, Printmaking, and the list goes on and on...

I've been lampworking since 1994-95 when I couldn't find the right beads to go with a jewelry piece I was making. Creating jewelry has been a passion since college and I've been doing this for over thirty years.

We're North Carolina transplants from Michigan. We left rural Northern Michigan for rural NC and I still get to see all kinds of wild animals. And, at the kids farm - horses and chickens too! This menagerie includes two golden retrievers and a very nice husband.

Friends Around the World